How to Trade the Doji Candlestick Pattern

The Doji candlestick, or Doji star, is a unique candle that reveals indecision in the forex market. Neither the bulls, nor bears, are in control. However, the Doji candlestick has five variations and not all of them indicate indecision. That is why it is crucial to understand how these candles come about and what this could mean for future price movements in the forex market.

What is a Doji Candlestick and How Does it Work?

The Doji candlestick, or Doji star, is characterised by its ‘cross’ shape. This happens when a forex pair opens and closes at the same level leaving a small or non-existent body, while exhibiting upper and lower wicks of equal length. Generally, the Doji represents indecision in the market but can also be an indication of slowing momentum of an existing trend.

Advantages of Using the Doji Candlestick in Technical Analysis

The Doji star can prove invaluable as it provides forex traders with a “pause and reflect” moment. If the market is trending upwards when the Doji pattern appears this could be viewed as an indication that buying momentum is slowing down or selling momentum is starting to pick up. Traders may view this as a sign to exit an existing long trade.

However, it is important to consider this candle formation in conjunction with a technical indicator or your particular exit strategy. Traders should only exit such trades if they are confident that the indicator or exit strategy confirms what the Doji is suggesting.

Remember, it is possible that the market was undecided for a brief period and then continued to advance in the direction of the trend. Therefore, it is crucial to conduct thorough analysis before exiting a position.

Apart from the Doji candlestick highlighted earlier, there are another four variations of the Doji pattern. While the traditional Doji star represents indecisiveness, the other variations can tell a different story, and therefore will impact the strategy and decisions traders make.

Furthermore, it is very unlikely to see the perfect Doji in the forex market. In reality, traders look for candles that resemble the below patterns as closely as possible and more often than not, the candles will have a tiny body. Below is a summary of the Doji candlestick variations. For an in-depth explanation read our guide to the different Types of Doji Candlesticks.

2 — How to Trade the Doji Candlestick

There are many ways to trade the various Doji candlestick patterns. However, traders should always look for signals that complement what the Doji candlestick is suggesting in order to execute higher probability trades. Additionally, it is essential to implement sound risk management when trading the Doji in order to minimise losses if the trade does not work out.

Below we explore various Doji Candlestick strategies that can be applied to trading.

2.1 — Trading with the Doji star pattern 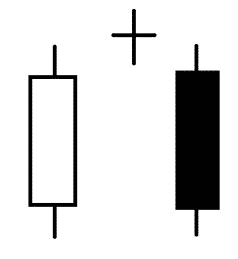 Conversely, the morning doji star is a bullish reversal pattern.  A black body candle in an downtrend, followed by a doji below the close, followed by a white body candly with the open above the doji. 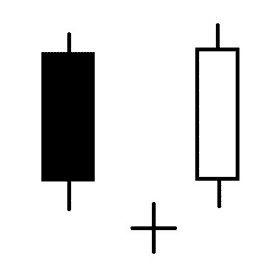 The GBP/USD chart below shows the Doji star appearing at the bottom of an existing downtrend. The Doji pattern suggests that neither buyers or sellers are in control and that the trend could possibly reverse. At this point it is crucial to note that traders should look for supporting signals that the trend may reverse before executing a trade. The chart below makes use of the stochastic indicator, which shows that the market is currently in overbought territory – adding to the bullish bias.

A popular Doji candlestick trading strategy involves looking for Dojis to appear near levels of support or resistance. The below chart highlights the Dragonfly Doji appearing near trendline support. In this scenario, the Doji doesn’t appear at the top of the uptrend as alluded to previously but traders can still trade based on what the candlestick reveals about the market.

The Dragonfly Doji shows the rejection of lower prices and thereafter, the market moved upwards and closed near the opening price. This potential bullish bias is further supported by the fact that the candle appears near trendline support and prices had previously bounced off this significant trendline.

Further reading on trading with candlesticks

What is a Spinning Top Candlestick?

A spinning top is a candlestick pattern with a short real body that’s vertically centered between long upper and lower shadows. The candlestick pattern represents indecision about the future direction of the asset. Neither the buyers nor the sellers could gain the upper hand. The buyers pushed the price up during the period, and the sellers pushed the price down during the period, but ultimately the closing price ended up very close to the open. After a strong price advance or decline, spinning tops can signal a potential price reversal, if the candle that follows confirms.

A spinning top can have a close above or below the open, but the two prices need to be close together.

What Does a Spinning Top Tell You?

Spinning tops are a sign of indecision in the asset because the long upper and lower shadows didn’t result in a meaningful change in price between the open and close. The bulls sent the price sharply higher and the bears sent the price sharply lower, but in the end, the price closed near where it opened. This indecision can signal more sideways movement, especially if the spinning top occurs within an established range. It can also signal a possible price reversal if it occurs following a price advance or decline.

Spinning tops are a common candlestick pattern, which means they work best in conjunction with other forms of technical analysis. For example, traders may look at technical indicators, like the moving average convergence-divergence (MACD) or relative strength index (RSI), for signs of a reversal before taking a trade based on a spinning top. Indicators or other forms of analysis, such as identifying support and resistance, may aid in making decisions based on candlestick patterns.

Example of a Spinning Top Candlestick

The chart example shows several spinning tops. The first one, on the left, occurs after a small price decline. It is followed by a down candle, indicating a further price slide. The price does head a bit lower but then reverses to the upside. If taking trades based on candlesticks, this highlights the importance of having a plan and managing risk after the candlestick.

The second spinning top occurs within a range. It confirms the current indecision of the market, as the price continues to head sideways.

The third spinning top is exceptionally large compared to the candles around it. It occurred after an advance and was followed by a large down candle. This ended up being a reversal candle, as the price proceeded lower.

As the price was dropping, another spinning top formed. It ends up being a brief pause, as the next candle gapped lower and continued falling.

4 — The Difference Between a Spinning Top and a Doji

Spinning tops and dojis both represent indecision. Dojis are smaller, with small real bodies and small upper and lower shadows. The Spinning top has long upper and lower shadows. Both patterns occur frequently and are sometimes used to warn of a reversal after a strong price move. Both types of candlesticks rely heavily on confirmation. A strong move after the spinning top or doji tells more about the new potential price direction than the spinning top or doji itself.

Limitations of Using the Spinning Top

Spinning top candlesticks are common, which means many of the patterns witnessed will be inconsequential. Since assets often have periods of indecision, this makes sense. Spinning tops frequently occur when the price is already moving sideways or is about to start.

As for forecasting reversals, the common nature of spinning tops also makes this problematic. Many spinning tops won’t result in a reversal. Confirmation is required, but even with confirmation, there is no assurance the price will continue in the new direction.

Trading around a spinning top can also pose some problems since the candle can be quite large from high to low. If confirmation comes after a spinning top and a trade is taken, placing a stop loss above or below the high/low of the spinning top could result in a large risk which doesn’t justify the potential reward.

Assessing the reward potential of a spinning top trade is also difficult since the candlestick pattern doesn’t provide a price target or exit plan. Traders need to utilize other candlestick patterns, strategies, or indicators to find a profitable exit