You may already be familiar with a regular gap, which is when a stock opens above or below its prior closing price. This happens very often and is a regular feature of the stock market.

What happens much less often and is much more important, is an exhaustion gap.

This is where not only do you experience a gap up or down, but you also experience a strong counter-trend move that goes in the opposite direction to the way markets have been trending recently.

Exhaustion gaps can reverse daily, weekly and even monthly trends and can be either bearish or bullish in nature.

An exhaustion gap has three main characteristics. First, is that there is a noticeable upward or downward trend in prices over several days, weeks or months depending on the timeframe you’re looking at. Generally speaking the longer the trend has been sustained the better.

The second characteristic of an exhaustion gap is that a very sizeable gap in prices is created from one day to the next. A good rule of thumb is that a gap is at least, if not more than, half the range of an average trading day for whatever stocks you are looking at.

The final characteristic of an exhaustion gap is that there is high trading volume taking place on the day of the gap. This will be unusually high, sometimes in the range of 5-10 times or more than average.

It’s usually a good idea to monitor 1-2 bars after the exhaustion gap has occurred to confirm the play.

What Is an Exhaustion Gap?

An exhaustion gap is a technical signal marked by a break lower in prices (usually on a daily chart) that occurs after a rapid rise in a stock’s price over several weeks prior. This signal reflects a significant shift from buying to selling activity that usually coincides with falling demand for a stock. The implication of the signal is that an upward trend may be about to end soon.

There are many authors and analysts who have written about exhaustion gaps. The curriculum for the CMT Association, the professional association for technical analysts, specifies that the exhaustion gap “occurs at the end of a sustained and volatile price move and confirms the reversal.” This definition turns out to be useful in understanding the dynamics associated with this price-pattern signal.

The principle behind an exhaustion gap is that the number of likely buyers has diminished and sellers have aggressively stepped into the market. The buyers may be largely exhausted implying that the upward trend is likely about to stop as sellers take profits from a previously extended rise in the price of the stock. The exhaustion gap has three particular features.

When these three components all exist in a two-day price pattern, it is usually referred to as an exhaustion gap and technical analysts expect that this signal implies prices will trend lower over the days and weeks ahead. The following chart is an example of an exhaustion gap that occurred on Netflix shares in the summer of 2018.

Notice how the price action shown in this chart is trending higher prior to the exhaustion gap, and the gap and following price drop appear to break the most recent trend. In the first example noted, the price reaches a climactic peak and the volume surges higher, culminating in the highest volume on the day following the downward, exhaustion gap. Buyers had previously been enthusiastically buying shares sending the price rapidly higher. Whatever was driving these buyers to purchase the stock at these prices was drawing the attention of many potential investors. Once the price reached its highest level, then it was as if there were simply no more buyers to push prices higher.

The gap day shows that sellers aggressively entered the market and seemed more concerned with getting out at all costs rather than preserving a good price for the stock. Thus, the day after, the gap opens higher and closes lower, leaving a large red-colored candle, depicting a tremendous amount of selling that day. The second example circled on the chart does not occur directly after the peak in prices, but it clearly violates the trend line and sets the stage for significant price drops thereafter.

Part of the confusion behind this stems from the fact that some authors have described the exhaustion gap as a gap higher in price that occurs at the end of an upward trend, but there are two problems with this definition. First, this definition makes the gap indistinguishable from other, more common gap signals such as a runaway gap. Second, this definition means that the signal can only be classified as an exhaustion gap in hindsight after the trend fails, rendering it useless for forecasting.

The definition provided in this article favors a more useful signal for forecasting trend reversals. Exhaustion gaps typically occur as the beginning of a trend reversal as evidenced by the way the price action after the gap will often violate a previous trend line. This moment in time, where price breaks a former trend, creates a substantial market opportunity for traders who want to be participating in the early stages of a new trend.

The signal has three main characteristics including increased volume and a downward price break.

Exhaustion gaps imply that buyers are used up or exhausted and don’t have enough orders to overwhelm the significant number of new sellers that seem to have entered into the market.

The Two Types Of Exhaustion Gaps

As mentioned previously, there is a bullish and bearish exhaustion gap. We’ll cover the mechanics of both of these now.

During a bullish exhaustion gap, a stock will have been experiencing a strong, sustained downtrend in prices. Then at some point an event occurs to trigger a sudden surge in selling pressure. For example, overnight a company may release a bad earnings report.

With so many investors reacting to the bad earnings report, there is a lot of selling pressure during the following day’s market open so the price gaps downwards strongly.

At the same time, if there is a surge in volume, it means a lot of buyers have come to the party and are willing to buy up the shares being sold.

Eventually, all the shares being sold are bought up by the new sellers, meaning the supply of sellers has become ‘exhausted’. Once all the sellers are ‘exhausted’ (they have no more to sell), a bullish reversal occurs.

This is why it’s important to not only look at the actual gap in prices but to pay close attention to total volume as well.

A bearish exhaustion gap works exactly the same way but in reverse. Rather than a strong, sustained downtrend in prices, it is instead an uptrend in prices.

Instead of a surge of sellers, it’s a surge of buyers and when the buyers become ‘exhausted’ the pressure from the sellers drives prices down. 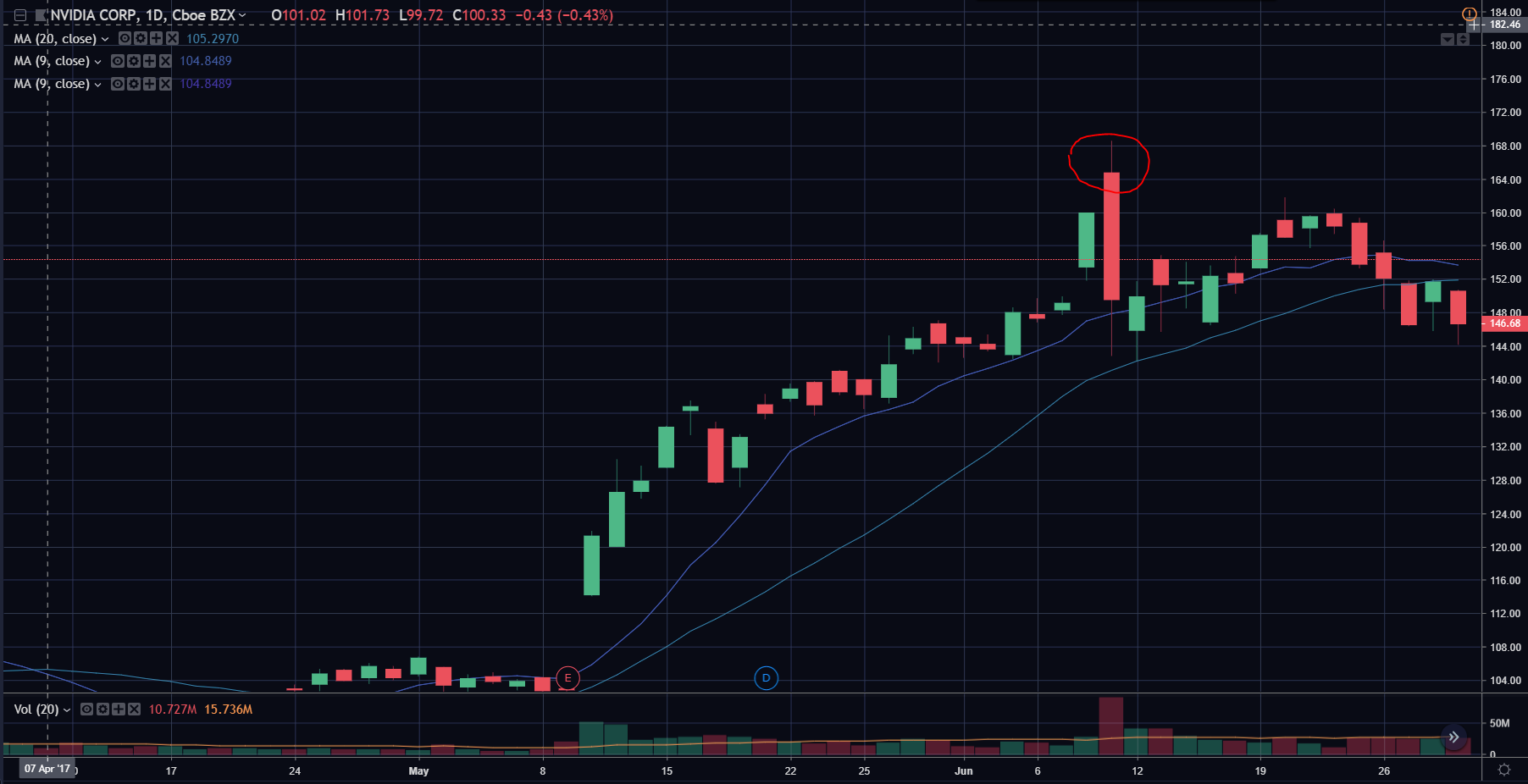 When To Use An Exhaustion Gap

You can choose to trade an exhaustion gap in one of two ways.

First, is to trade the exhaustion gap itself as it occurs. This is a very short term trading set up so when you trade it, you want to get in and out of out your position very quickly.

This can be over the course of several hours or at most several days. In this environment, you’re waiting for a sharp pullback occur.

The other way to trade an exhaustion gap is to use it as a signal for counter-trend trading.

For example, if you purchased a stock and enjoyed a long, sustained uptrend, you may use the exhaustion gap as a signal to exit your position in anticipation of the trend direction reversing.

In a similar way, you could use it as an entry point for buying stocks after a sustained fall in prices.

When using an exhaustion gap as a signal for entering a new position, it’s best to wait for several days before you execute the trade as the price could gap more than once in a row.

An exhaustion gap signals a reversal in trend direction and is comprised of three main characteristics:

Traders can choose to trade the exhaustion gap itself or use it as a signal to enter/exit a trade at the end of a trend.

The piercing pattern is a two-day candle pattern that implies a potential reversal from a downward trend to an upward trend.

Common gap is a price gap found on a price chart for an asset. These gaps are brought about by normal market forces and are very common.

A breakaway gap is a price gap through resistance or support. It is usually accompanied by high volume and occurs early in a trend.

Outside reversal is a chart pattern that shows when a security’s high and low price for the day exceed those achieved in the prior day’s trading session.

An Upside Tasuki Gap is a candlestick formation that is commonly used to signal the continuation of the current trend.

More on the same subject