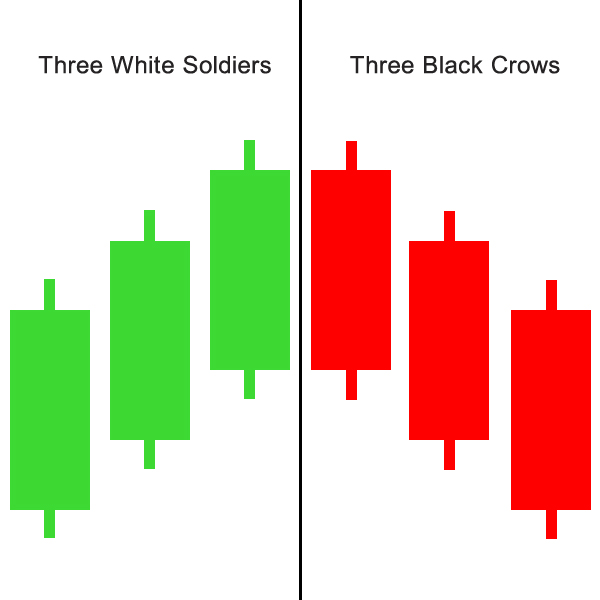 The Three White Soldiers pattern comprises three consecutive bullish candles of similar size which form after a downtrend. Preferably the second candle should be bigger than the first one and the third one should be at least the size of the second one. This is important, because if the third candle is significantly smaller than the previous ones, it would indicate that the bulls are not in complete control over the market movement. This would suggest weakness to some extent and could be a reason for the lack of a trend reversal.

You should be cautious with overextended bodies, because the market could become overbought or oversold, which can lead to a correction.

The candles are preferably long and have small or almost no upper shadows, which means they close at or near their highs. Generally, you dont need to look for the perfect candles that have no wicks (Marubozu), but if the shadows are too long and even equal or exceed the length of one of the bodies, then you need to remain wary as the bears are still fighting.

The candles should open within the body of the previous candle or at its high.

However, one distinct drawback of the Three White Soldiers pattern is that its recognition requires a lot of time, which means that a large part of the newly formed and confirmed trend has already passed. The second candle is considered by many professional traders to be the best entry spot and its best played on a pullback or throwback.

The pattern is considered as stronger if the open of the second and third candles coincide with the close of the previous candles (first and second ones). It will also bear more strength if it occurs not just after a long downtrend, but after a sideways consolidation which had followed the downtrend and separated it from the pattern.